Your Customized Guitar: How to Build an Electric Guitar From Scratch

by The Piano Mayor | Guitar

Ever dreamed of building your own electric guitar? One of the topics that usually generates a lot of interest in most musicians is the choice of the instrument that best suits their needs, abilities and ambitions.

The electric guitar, due to its wide range of characteristics, is one of those instruments that must be studied in detail before deciding between one model or another. In fact, making a careful study of the instrument and its parts before buying them in a shop can help us to understand that our only option is not to buy them but to assemble them ourselves.

Can you build your own electric guitar?

It might not seem rational to assemble an electric guitar instead of going to a guitar shop and choosing one directly. But more and more musicians are willing to buy or build the pieces that compose it and assemble them on their own. There are many reasons why it might be more appealing to put one together, but there are usually two main reasons that stand out in the process:

In the first case, the assembly of the guitar can serve as practice for manual work, design, and construction. With a bit of practice and detail, you can obtain electric guitars of acceptable quality and that generate a good sound.

How long does it take to build an electric guitar from scratch?

To avoid the difficulties involved in building and assembling a guitar from scratch and at the same time enjoy the creative process by making use of our manual skills, more practical options can be considered. That is, we can resort to the use of tools and parts previously manufactured and qualified for assembly. Thus, if the person is really ready and willing to assemble an electric guitar, he/she can limit himself/herself to a process of putting pieces together and save a lot of time and effort in design and construction,

Building with the help of a kit

An electric DIY guitar kit is nothing more than a group of prefabricated parts arranged for the assembly of an electric guitar. They are usually very practical since they usually provide an instructional manual that specifies the operation of each part and outlines the procedure to be followed.

At the same time, they can be presented in different ways according to the pieces required and the guitar model you want to achieve. For example, we could look for a kit for Fender-style electric guitars or one for Gibson-style electric guitars (see Fender and Gibson guitars). Thus, we can not only build our guitar with the help of these parts, but also customize its design and functionality.

I highly recommend going with a kit, especially if it’s your first time building an electric guitar, the extra complexities of thinking ahead to when your playing over your guitar amp or the traditional styles the kit will guide you through the process. 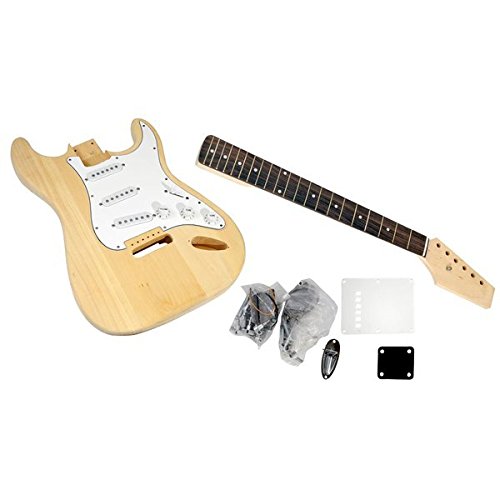 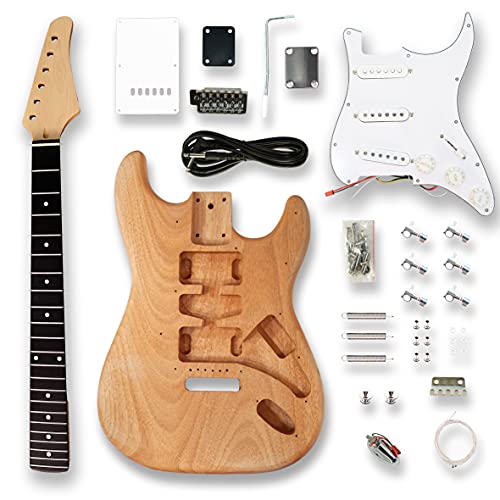 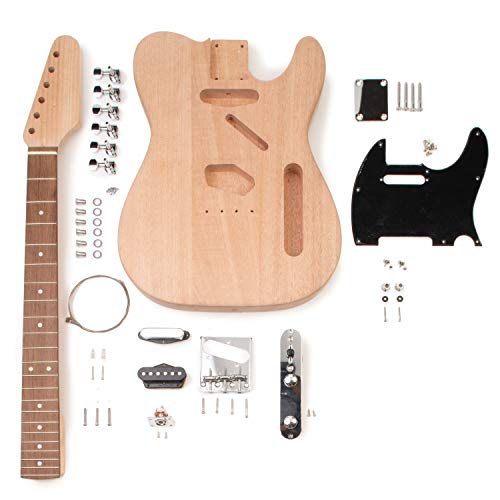 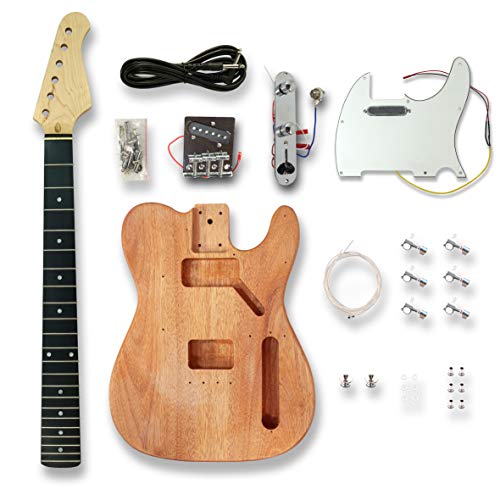 The electric guitar kit can be presented with various levels of complexity according to the amount of pieces it contains and can be found elaborated with different types of materials. However, it is a fact that any kit intended for the construction from scratch of an electric guitar must provide, if not all, at least a great part of the following elements:

How much does it cost to build your own electric guitar?

The cost to build your own electric guitar is $75 on the low end using a prefabricated electric guitar kit. If you build from raw materials and need additional tools the cost can increase significantly.

All these parts may vary according to the kit purchased. However, no matter the style of the guitar, the number of pieces or the scheme presented in the instruction manual, the aesthetic and functional result will depend on the individual’s own style. For example, you could level frets, change the tuning pegs to a different shape, use hardware made of stronger materials, paint the pickguard and customize it to your liking, and so on. The kit provides the basic components and leaves the process to the creativity of the person who purchases it.

How hard is it to build an electric guitar from scratch?

Usually, when we look for electric guitar kits we won’t find a sign indicating the degree of difficulty and the time it will take to build them. It’s slightly more difficult than building an acoustic guitar, but the concepts are essentially the same and each have their own challenges.

We can assign the kits a degree of difficulty based on the amount of work and manual skill required and the external tools required for joining and attaching the parts. Of course, we can find diy guitar kits where the use of power tools is imperative and others that just need a bit of brute force on a few screws. That is why it is important to study the details of the kit you want to buy. Base your decision on the final guitar you want and the skills you can put into practice.

Now, we already know that the kit will enhance the process of building our electric guitar and that the manual skill of the person has a great influence in the process. However, other factors should be considered that affect the purchasing process and that are specific to the kit, such as affordability, style, and material used to manufacture the pieces that make it up. To do this, let’s suppose that we want to build an electric guitar and we go to a shop looking for a kit. The first thing to consider is the style of the electric guitar. So, for example, let’s say we are looking for a kit to assemble a Stratocaster guitar (see Fender Stratocaster). Then, keeping the style in mind, the following tips can be followed:

The style of guitar body selected has a great influence on the number of materials, tools, and effort needed to assemble the parts contained in the kit. It’s not enough to choose one style or another just because it looks good or because we’ve heard our favorite guitarist play a solo. It is important to consider that the process of building the guitar is not only about obtaining an aesthetically attractive object because in that case, but it would also be better to go to a shop and buy the guitar in the desired style. Instead, the kit makes it possible to obtain a guitar whose appearance and functionality reflect the character of its creator and/or the player. Therefore, there are certain aspects related to the style of the electric guitar that should be taken into account when purchasing the kit:

Fender Stratocaster guitar kits are usually very affordable and represent a great investment, due to the quality they acquire once they are finished. The parts that make it up are usually made of alder wood, like most Stratocaster guitars. The fingerboard comes with the frets and the headstock is usually in the form of a block so that the person in charge of the process is free to give the desired shape to the headstock. On the other hand, the electronics are usually not as complex as on other guitars. In fact, the kit for this type of guitar is considered a good way to start since it doesn’t require a lot of manual dexterity or external tools.

When it comes to guitar making, Gibson style guitars, particularly Gibson Les Pauls, stand out for their complexity. When compared to others, such as the Stratocaster, the body finish and wiring of its circuits require greater precision to achieve the desired quality. Now, when we talk about the kit for Gibson Les Paul type guitars the complexity is not far behind. Even many kits for this guitar often come with the wiring pre-assembled to make the process easier. In turn, these kits usually provide a characteristic glued neck, unlike the Stratocaster neck pocket, which is usually bolt-on. They are commonly made of Mahogany, Alder or Basswood and the body has pre-drilled holes, saving a lot of effort but increasing the likelihood of misalignment of the screw hole, which requires some additional work in the assembly. The Gibson Les Paul kit may be more expensive than the Stratocaster kit, but the quality of the parts and the end result is promising.

Thus, the two most popular electric guitar models are taken as an example and whose prominence goes back more than 50 years. Both the Gibson Les Paul and the Fender Stratocaster have been used by countless artists in a wide variety of genres. Today they are still promising guitars whose quality never ceases to amaze us. However, if we decide to build a guitar with the help of a kit there are many other models that we can study. The design and desired functionality will depend on the sound and style in mind, whether for playing, displaying or selling.

Another one of our favorite DIY builds is the Les Paul. Heres a quick video tutorial on how to build an electric guitar from scratch. In his case, he went the Les Paul route.

Building a LES PAUL Guitar kit! - This Thing is Beautiful!

What is the most important part of building an electric guitar?

The most important part of the electric guitar building is to be patient. It’s a process that will take time to master. The more precise and attention to detail you put into the build, the more rewarding the outcome of your newly built guitar.

Building an electric guitar from scratch can be a big challenge for those just starting to learn. The kits make the work much easier and, thanks to their instructional manuals, are didactic. But many aspects must be taken into account when choosing the kit, not only based on the guitar we want but also on the effort we must put into practice to get to that guitar.

Best of luck and congrats on choosing to build your very own custom guitar!