The E flat major scale is one of the best-known scales in classical music and currently widely used in popular genres such as Rock.

Since the E flat major does not have many accidentals (sharps or flats) it can be easy to learn and practice no matter what instrument you play.

The E flat major scale is typically not the first choice for beginner musicians, but it is a great help in the study of music when you have already experimented with major scales such as D or A. 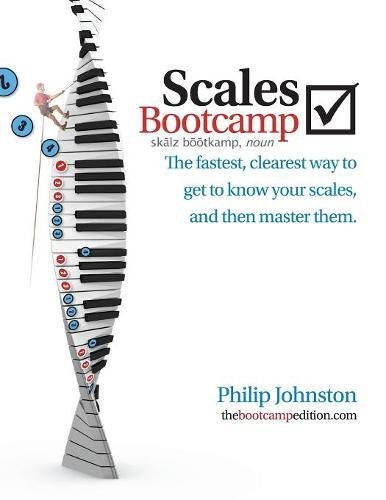 Scales Bootcamp: The fastest, clearest way to get to know your scales, and then master them.


What is the G Major Scale?

The E flat major scale is nothing more than a scale of musical notes that are structured in intervals of one tone between each degree, with the exception of degrees III – IV and VII – I, where the distance is half a tone, and whose main note (commonly called tonic) is E flat.

That is, the E flat major scale is built starting from the note E flat and continuing by leaving one tone between each note, except between the third and the fourth and between the seventh and the first note.

In this way, we can say that the notes that make up the E flat major scale are:

Thus, it is the tonic E flat which, being the first note of the scale, gives the scale its name.

For example, see what the E flat major scale pattern would look like over an octave on the piano. 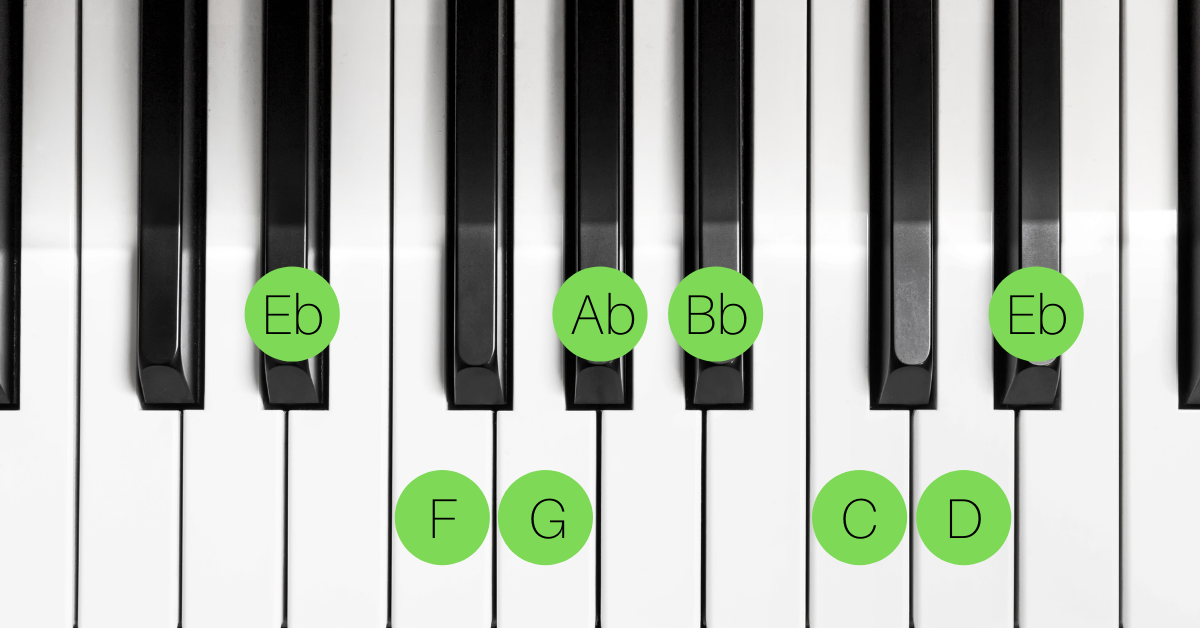 Note that most of the white notes of the scale can be achieved on the white keys of the piano. This makes the scale easy to identify at first sight and to play without the need for a lot of previous experience.

At the same time, we can also visualize a pattern for the scale on the neck of the guitar that would look like this: 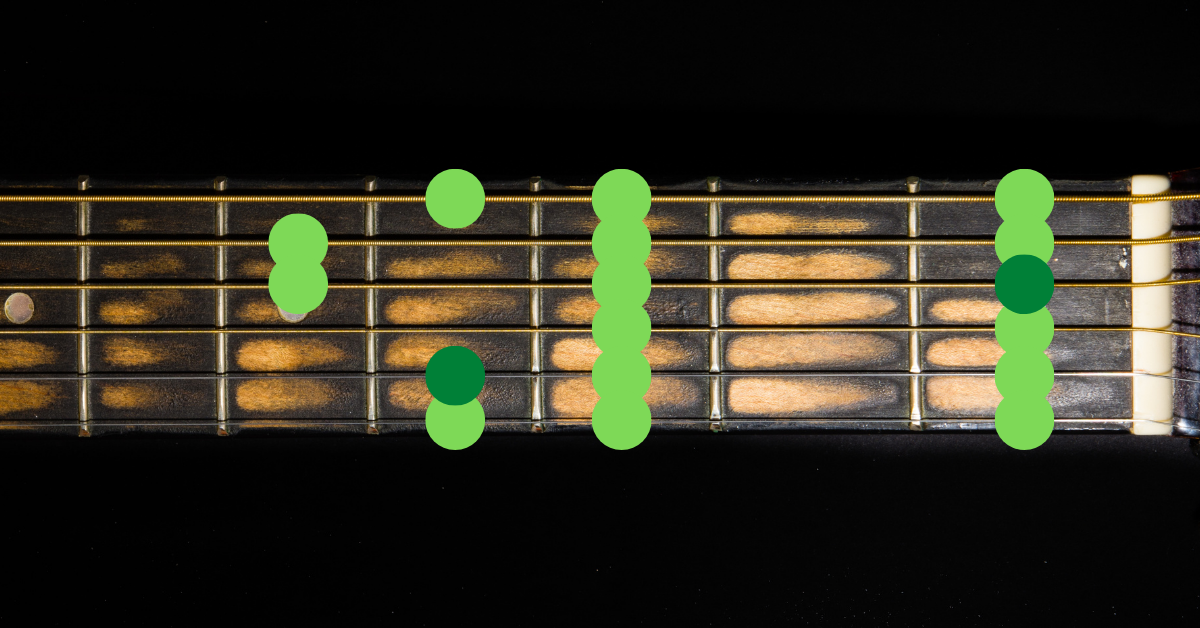 Then, based on these patterns we can know where the notes belonging to the E flat major scale will be placed, both on the piano and on the guitar. With them, we can create different successions of notes and thus create various melodic phrases more easily.

It is important to keep in mind that in the piano the pattern is the same in all octaves, the only thing that will change from one octave to another will be the altitude of the notes. However, this is not the case with the guitar, as the pattern shown in the image can change along the neck. To find the rest of the patterns on the neck of the guitar you can identify all the notes of the E flat major scale on all the strings, point them out and play them.

The E flat major scale and other instruments

The E flat major scale can be played easily on most instruments because it has only three accidentals (E flat, A flat, and B flat). In this way, this scale can be very versatile in string instruments such as the violin or the mandolin, in whose strings we can find the notes G and D, both belonging to the major scale of E flat. Then, when playing the scale on such instruments, we could leave the execution of two notes with the strings in the air and thus facilitate the interpretation.

We could take some chords from the table and play them one after the other to obtain a chord progression in the key of E flat major, being the first chord (Eb) corresponding to the tonic the one that gives the key its name.

Harmonizing the E flat major scale not only provides a group of chords but also expands the possibilities of composition, improvisation, and arrangement in the key they represent. This is achieved thanks to all the combinations we can make with these chords to build harmonic bases that, when played together with some rhythm, can be complemented with a melody built based on the scale, adding maybe some external notes to it.

Every musician who wishes to reinforce his knowledge and practical skills should make use of the chords obtained in the harmonization of the E flat major scale and create progressions with them. If you don’t know where to start, you can take the following progressions as a reference.

These progressions can be played one after the other at a tempo appropriate to the musician’s ability.

In turn, melodic phrases based on the E flat major scale can be constructed and played in conjunction with these chords. In this way, the musician will unite the concepts of harmony and melody to ultimately produce music.

The musical notation of the scale is also a very useful tool for the study of music since it helps to illustrate in more detail its structure.

When we write the E flat major scale in a pentagrammed notebook we can visualize more clearly the notes that compose it, the accidentals present and the intervallic distances. At the same time, mastering the musical reading of the scale can serve as a basis for the subsequent study of pieces written in the key of E flat. That is, the skill in reading songs written in this tonality will be increased and with it the interpretation of the same will be speeded up.

In the following image you can see how to write the E flat major scale, both in F and G clef: 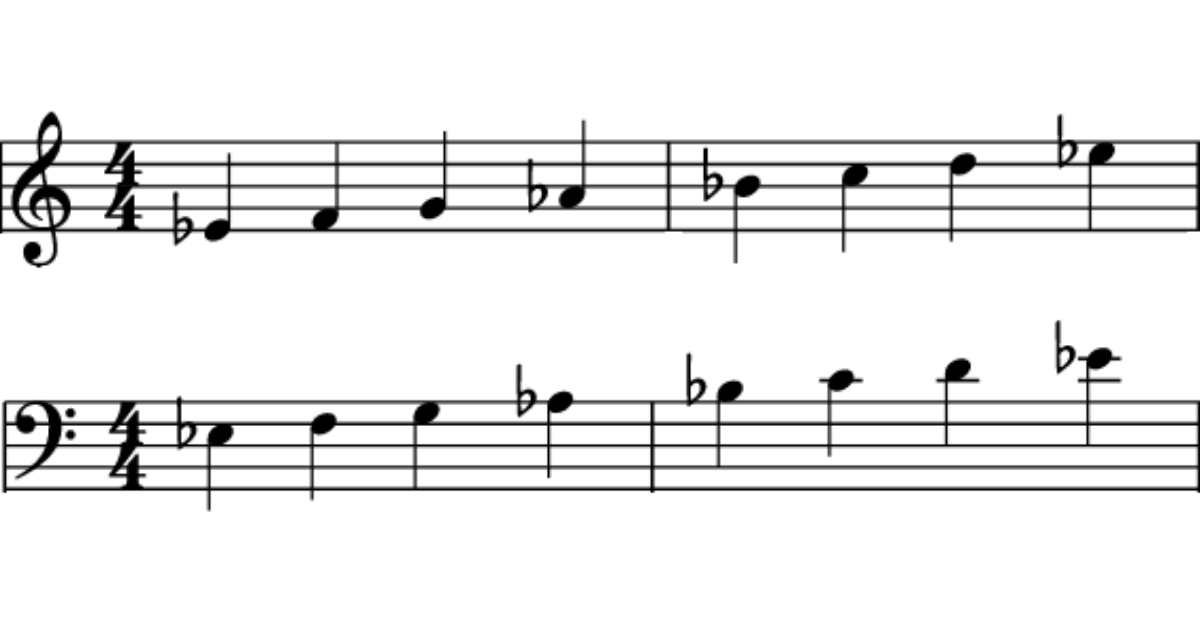 So, let’s suppose we want to perform some song written on a pentagram notebook. The first thing we should do is identify the key in which it is written. To find out if a song is written in the key of E flat major, we must make sure that the only accidentals in the key signature are E flat, A flat and B flat.

In this way, when we find a piece written in the key of E flat major, we already know that the notes of the song must be notes belonging to the scale already studied.

If we study the E flat major scale patterns on our instrument we will be able to interpret more easily the melody, bass or harmony that is written in the pentagrammed notebook. This will save us from having to identify every note written on the staff on our instrument before we can proceed to play the song.

The harmonized scale is not usually represented with the help of traditional musical notation.

Instead, American notation is usually used to represent chords, such as Em, C, Eb, Bb, etc. However, in the study of music theory, it can be helpful to write the harmonized scale in a pentagram notebook, since it illustrates more clearly the notes that make up each chord and the distances between them.

It is also useful when you want to directly add, remove or alter chord notes in the process of composing, improvising, or arranging a song.

The E flat major scale and the E flat minor scale are often taken as the same object, but the truth is that they do not share sound characteristics that make them apply in the same way. For example, while the E-flat major scale is constructed by leaving a half-tone distance between the third and fourth notes, the minor scale leaves only a single tone distance between them. Thus, both scales are built following different structures.

At the same time, as both scales are structured on the basis of different sonorities, it is to be expected that the chords obtained in the harmonization of both scales will also be different.

To better understand the structure of the E flat major scale, it is useful to visualize the distances between each of its notes:

A slight change in any of these distances would alter the natural structure of the major scale, and thus its sonority.

The relative scale of E flat major is the minor scale of C and is characterized, among many things, by sharing the same notes and chords of the major scale.

Even though the E flat major and minor scales do not have any characteristics in common, it is possible to find a scale that shares the sonorities of the major scale. This relative scale has the same accidentals as the E flat major scale and are therefore written similarly in the staff notebook but starting on different notes.

One of the advantages of knowing the relative scale is its duality with the major scale. That is, if we get a song written in the key of C minor, the relative key, it will be enough to know the notes of the E flat major scale to know in which scale patterns the notes of the song will fall. However, even though they have the same notes and chords, they are not the same scales, since they are used for different purposes.

How do you know if a song is written in the key of E flat major or in the relative key?

To know if a song is in the key of E flat major or in the key of its relative, it is convenient to identify the chords on which the song is based. As both keys have the same notes and chords it might be confusing to notice such a difference. Thus, if a song concludes its verses or sections in major chords, it could be assumed that the key corresponds to E flat major. Otherwise, if the song ends in minor chords, the relative key could be assumed.

In any case, it is not a simple task, and only constant study and practice can help the musician to determine it.

So, as E flat and D sharp have the same intonation, when applying the structure of the major scale starting from both notes, two scales with the same sonority are obtained.

As both scales have the same sonority we could ask ourselves which one is better to use. Certainly, the use of both will depend on the musician’s objective. For example, while some may need to express a song with sharps, others may prefer the use of flats for writing and arranging.