by The Piano Mayor | Guitar, Scales

Looking to play some classy surf guitar scales next time you are at the beach?

The surf guitar gained great popularity during the sixties with the birth of a musical genre linked to the surf culture.

Surf music is a musical style that with the help of artists like Dick Dale and The Beach Boys became very popular, has been characterized by representing the surfing community and in turn for wanting to evoke the sound of ocean waves with its particular sonority. Thus, with a different approach to the popular music of that time, such as that of The Beatles, surf music emerged as a new manifestation that has led many guitarists to experiment with elaborate compositions and new playing techniques.

How to learn to play surf music on the guitar?

When it comes to online guitar courses. GuitarTricks.com has the most Surf Guitar-related tutorials we’ve found, and comes highly recommended.

In order to learn how to play surf music on guitar, you must take into account that this musical genre has two variants.

One of these variants is surf rock, being the first to appear, commonly characterized by being instrumental with a melodic line performed by an electric guitar.

On the other hand, we can find the pop surf, characterized by having a vocal accompaniment developed based on strong and moving harmonies. 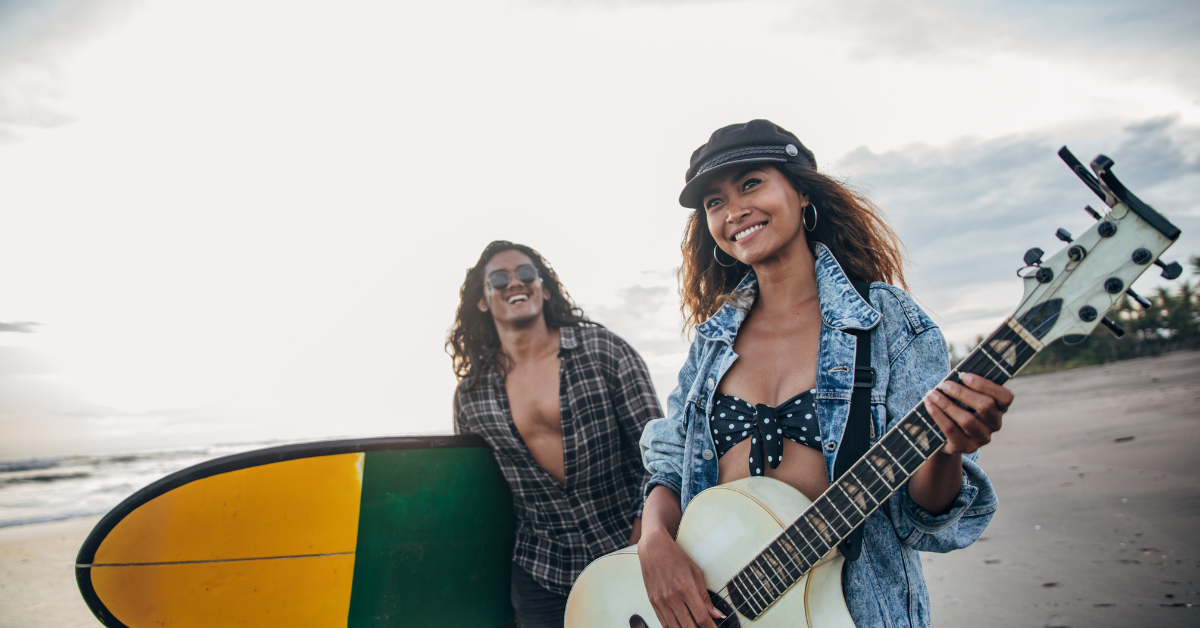 In both cases, the guitar plays an important role with the use of riffs, both for the accompaniment of the vocals and for the development of the melodies on their own. Therefore, it is to be expected that the use of guitar scales, chord progression, and playing techniques such as tremolo and slur. However, certain differences can be identified in both variants:

●Surf rock: The melody falls on the guitar and sporadically on some brass instruments. Good guitar picking skills are required to play fast melodic lines that can run all the way up and down the neck.

● Pop surf: Because the vocals play the main role, the guitar takes a back seat. In this role, it is important to handle the scales for the execution of second voices, or second melodic lines, and the strumming with the plectrum for the interpretation of the chords and the natural rhythm of surf music.

What are the most used guitar scales in surfing?

The guitar scales most commonly used in surf music tend to have minor-key sonorities. That is because surf music songs usually build their progressions based on minor key chords, it is common to use scales that have a similar sonority. In this way, the following surf guitar scales can be taken as a basis:

● Minor Scale: being a very suitable option for playing in minor keys, the minor scale will provide the notes that make up the chords in the minor key being played. Thus, the musician will be able to play notes that sound properly just by knowing the chords of the harmony.

● Phrygian mode: the Phrygian modal scale plays a similar role to the minor scale. This scale will have the same structure except for one degree, the second, which will be flat.

● Pentatonic Scale: the pentatonic scale is a five-note scale that is easy to play because it does not require much effort to learn. With only five notes you can create many melodic combinations that sound good and adapt to the chords that make up the harmonic base.

● Byzantine Scale: The Byzantine or Arabic scale is a scale whose second and sixth degrees are flatted. Although it is not as well known as the previous ones, its sonority is known for having been applied in surf rock songs like ‘Misirlou’, by Dick Dale, and for giving a “Spanish” sound to the songs. We’ve also heard people refer to this sound as “Middle Eastern Music.”

What are the most important elements of the surf sound?

The most important elements of the surf sound arise from the intention that this musical genre possesses. Originated in the culture of surfers, in the coasts of the United States, it wanted to illustrate, through music, the ocean, the waves of the sea and the beach. This is how the most characteristic sounds of surf music are born: the reverb and the tremolo.

Reverb helps to prolong the sound of notes after they have been played, this is usually achieved with electric or electro-acoustic guitar effects.

On the other hand, the tremolo is the repeated variation of the intensity of notes, achieved on the acoustic guitar with advanced playing techniques and on the electric guitar with the help of the tremolo located next to the bridge or with pedals. Thus, with these effects, we try to imitate the natural sounds of the beach, such as the constant change in the intensity of the wind or the echo of the waves crashing against the seashore. 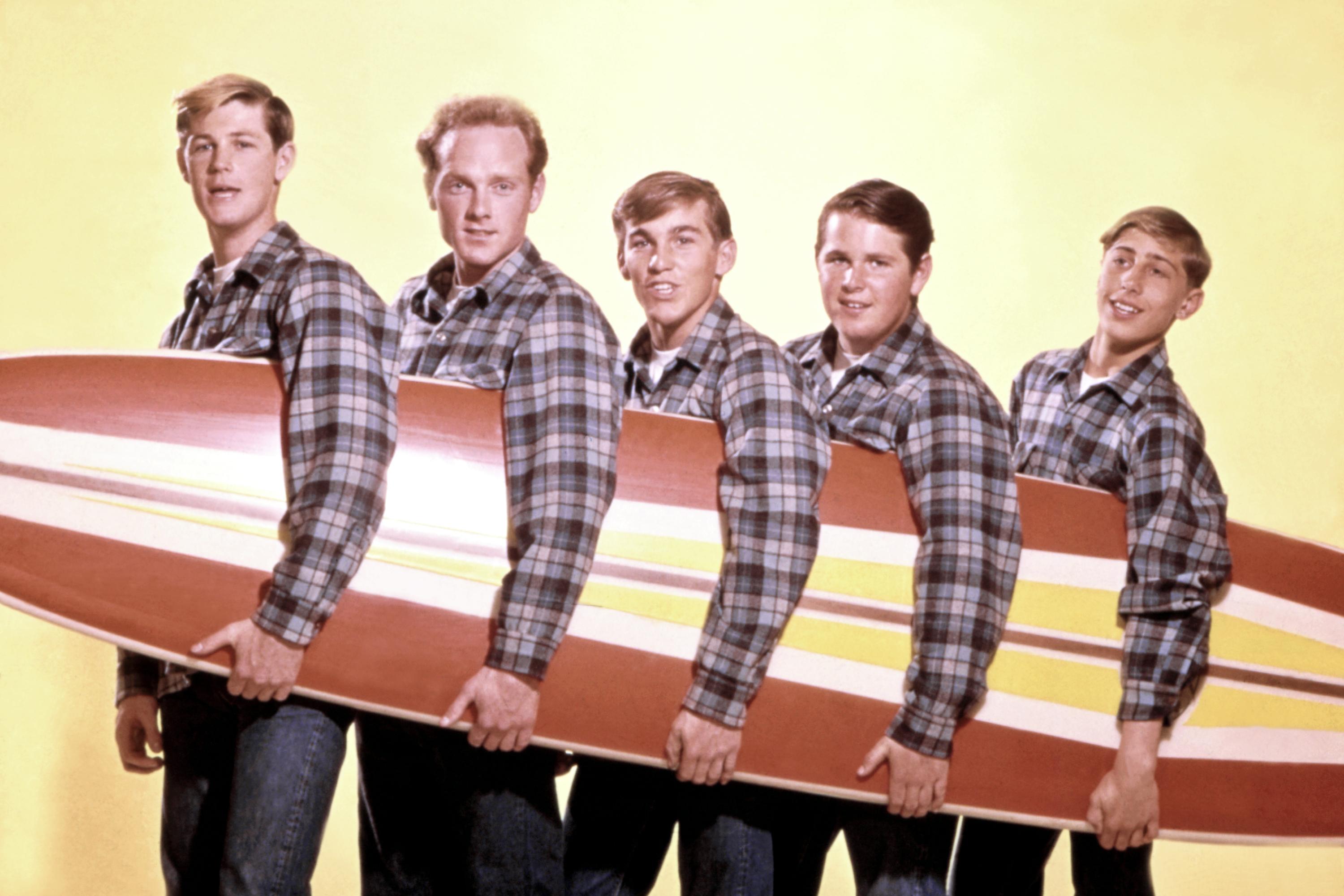 At the same time, it is common to find a harmonic base and a very moving and strongly played percussion. While in surf rock the guitar is influenced by some rock n’ roll techniques, with a strong instrumental presence, in surf pop the intensity of the instruments is diminished a little to give way to the voices. However, the basic ideas of reverb and tremolo are retained.

Where can I find details, analysis, or theory of surf guitar scales and music?

Finding information related to surf music, both for music theory and for details related to its history and evolution, is more complicated than with other musical genres.

Genres such as rock, jazz, blues, classical music, and even flamenco, you can get websites and books devoted entirely to their study, for surf music there is no such abundance.

Being a local music genre, that is, born in a community and popularized mostly within a specific country (USA), it is to be expected that the plausible material dedicated to this genre is reduced.

So, since there are very few reliable sources of information for learning this genre, the following materials can be taken as a basis:

●ChachiGuitar – Surf ChachiGuitar, is a set of scores and videos taught on the ChachiGuitar platform, which is dedicated to teaching guitar.

Here are a few of our favorite Surf Guitar books you can find on Amazon (primarily sheet music). 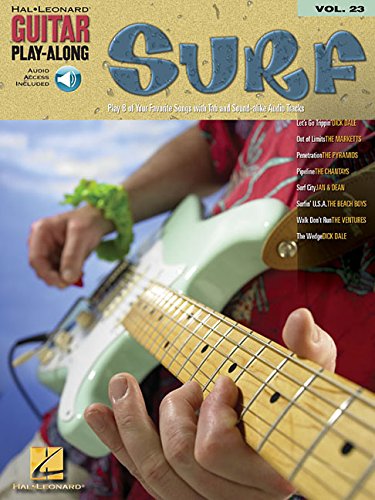 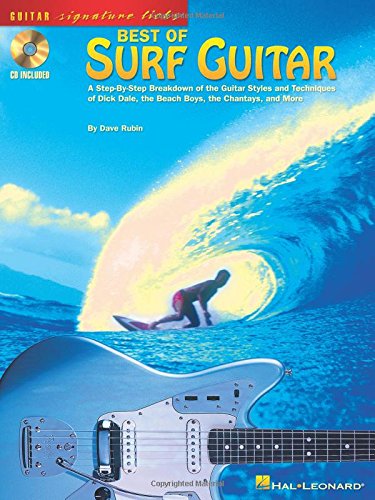 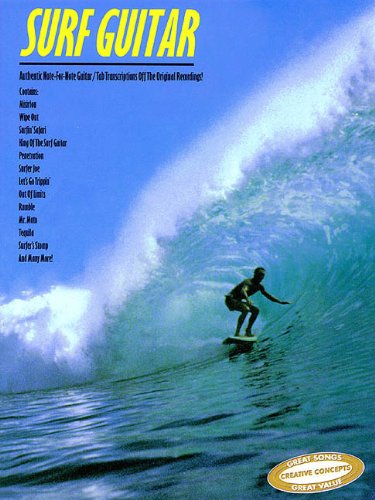 You could also find surfing websites that dedicate some articles to music and talk about this genre, as well as blogs dedicated to discussing issues about this kind of music. However, the information may not be complete or fully reliable.

What scales to use for surf guitar solos?

The scales used to compose or improvise surf guitar solos can be, in fact, the same scales as above. That is, the minor scale, the Phrygian mode, the pentatonic scale and the Byzantine scale. It gets complicated when we don’t know which one to start with.

There is certainly no standard in music that dictates some immutable parameter that absolutely determines what the musician does. We have all these tools at our fingertips and it is up to us to use them according to what we want to express through music. For example, we could use the minor scale to play a solo that sticks to the harmonic base, going through the notes of the chords, or we could use the Byzantine scale to add flamenco guitar sonorities, or we could use the pentatonic scale as a bridge to play between several scales at the same time.

The truth is that the success of a surf guitar solo lies not only in the scale used, but also in the technique applied. For example, the Byzantine scale alone could generate a generic phrase that fits many other variants of rock. However, with the help of the tremolo, executed quickly with the pick, you can evoke classic surf rock sounds of the sixties.

Which are the best Surf Rock bands?

The best surf rock bands, or at least the ones that have gained the most prestige over the years, have been The Ventures and The Beach Boys.

These two bands have stood out for their versatility with their percussive construction, such as the presence of two drummers from The Ventures, and the combination of complex first and second voices, such as the melodic arrangements of The Beach Boys. These bands produced songs that are still very famous today, such as ‘

‘ by The Beach Boys.

On the other hand, when talking about the interpreters of surf rock is inevitable to take into account Dick Dale. This famous guitarist, together with his band Dick Dale & The Del-Tones, is known for being the initiator of the genre and the precursor of many of the sonorities found in this music. Misirlou is still well known, and was even used as the soundtrack for a film directed by Quentin Tarantino.

At the same time, we can also find other bands less known but very acclaimed by the critics in general.

For example, The Chantays, popular mainly for their instrumental song ‘The Chantays’.Pipeline‘, and The Surfaris, who had national hits in the United States. Although you won’t find an extensive list of surf rock performers, certainly the few mentioned above exploit the genre’s capacity and make famous a musical style that, without their help, could have already been forgotten.

What is the best guitar for surf music?

The best guitar for surf music is the one that helps to produce the sounds that best evoke what this genre wants to transmit. With some help we could produce reverb and play a tremolo on an acoustic guitar, but the effect would not be the same. Because of this, the ideal for this type of music is the use of electric guitars, with their respective pedals and amplifiers to produce a long and intense sound. 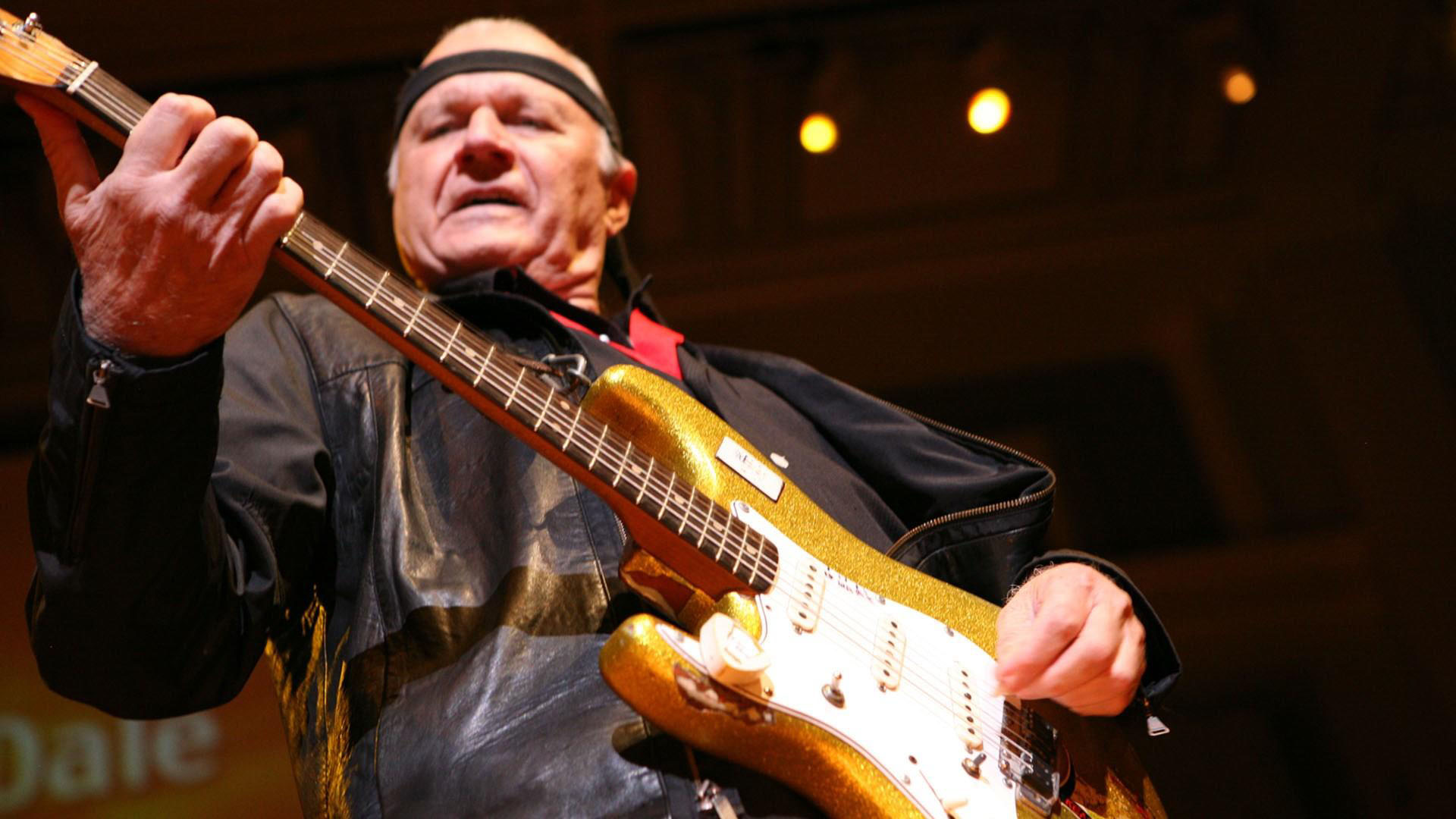 If we go back in time and take Dick Dale, The Ventures or The Beach Boys as an example, we can notice that Fender-type guitars predominate. And indeed, the Fender Stratocaster and the Fender Telecaster have been frequently used in rock and its variants. So, while they may not be the only option for the musician who wants to play surf music, they are at least the most suitable for producing the best beach sounds.

What is the difference between surf music and rock music?

The biggest difference between surf and rock music can be found in the use of the chords used in both genres. Surf music stands out for its constant use of minor scales and its tendency towards oriental sonorities, partly due to its partial use of the Byzantine scale (very noticeable in themes such as Pipeline and Misirlou). Rock, on the other hand, can make use of all those scales applied in surf music, but it also emphasizes other types of sonorities and modal scales, such as the Mixolydian or major scale.

On the other hand, while surf music strongly emphasizes the use of tremolo and reverb to achieve its characteristic sound, rock music, in general, makes frequent use of techniques such as bending and tapping. We could play some melodic phrase, first with the use of tremolos and then with the use of bendings, and notice the sound difference between both cases. Likewise, surf rock is a musical current derived from rock, so it is to be expected that they have more similarities than differences.

Final considerations for the musician

Surf music provides new ways to generate sounds with the guitar and to complement those sounds with the voice or other instruments. At the same time, the electric guitar plays a fundamental role in the production of these new and extravagant sonorities. However, if you only have an acoustic guitar we should not be discouraged because we can still practice techniques such as tremolo and apply it to the execution of scales such as pentatonic or Byzantine. This genre undoubtedly gives us the opportunity to expand our skills and, in turn, to put them into practice with new surf guitar songs.