C Major Scale – (C Maj) Everything You Need to Know

We all talk about scales in music, sometimes more than any other musical topic. It is not uncommon to hear musicians ask questions or say things like: “what scale sounds that way?” “I think a C major scale would work better in that part of the song,” “wow! this song uses a minor scale.” That being said, with tonal music (music that has specific keys) scales remains one of the most important aspects. We can never overstate the importance of scales in music. Regardless of the genre you play, be it hip hop, jazz, blues, rock, EDM, classical, or even gospel, scales would always remain one of the most important things to study in music.

The word “scale” originates from a Latin word that translates “ladder.” As I said, a scale is the tonal basis of any kind of music. To understand how scales work, think of a ladder, because that is what it translates to in Latin. On that note, we can say that a scale is a set of musical tones [arranged in a certain order] from which we can create melodies and harmonies. The tones of a scale are strategically ordered according to their different pitches. Because scales are used to create many distinctive moods, flavors, and colors, there are very many scales in the world. Almost as much as the different cultures of the world. But, in this article, we are going to focus on only the C major scale.

Like I mentioned before, the C major scale is made up of the following musical notes or pitches:

When counting, you discover that there are seven different musical notes in the scale. The notes become eight when you repeat the first note at the end (octave). When the C major scale or any other scale is played, the first (root) note is usually repeated at the end of the scale, although one octave higher. With the C major, that note is C. When the root note is repeated this way at the octave, it kind of “rounds off” or summarizes the scale and makes it sound complete. It will sound rather incomplete and unsettling if we stopped the scale on the B note. By checking it out yourself, you would notice that if it ended on B, the scale would sound like it is hanging in mid-air. Therefore, it becomes necessary to include the final C in examples and illustrations, all depending on the situation.

In every musical scale, each musical note will have its very own position within that scale. This is more like everyone having their position in a queue – no one should jump a queue! For example, the note F assumes the 4th position, or degree, of the scale. Counting from the root note, which is C, you would notice that the note F is in the 4th position. Technically in music, the 4th note in any given scale is always named the “subdominant.”

The chart shown below indicates the position of each note within the C major scale:

The C Major Scale on the Piano

How to Play the C Major Scale On the Piano

When playing any musical instrument, be it the guitar, trumpet or the piano, learning your scales and proper fingerings are as important as any other musical technique we can ever learn. Learning these will help build dexterity, and in the long run, you will conquer even the toughest musical passages you can ever come across.

A Basic demonstration of the C Major Scale on...

Both hands are placed an octave apart. Begin from the lower register (octave) and leave yourself just enough octaves to go all the way up to the high register (the upper part) on the piano

Finger the notes as follows: Let your right hand place the thumb on middle C, put your second finger on D, third on the note E, then finger 1 (the thump) again on the F note, put finger two on G, place three on the note A, four on the note B, and again place finger one on C. If the second C note is your last octave then instead of playing that C with your thumb, just finish your last octave with your fifth finger (pinky).

To play the left hand, simply mirror the right hand.

“Solfege” is a system in music that assigns specific syllables to each musical scale degree, so that we can sing the notes of that scale and learn the special sound of each one of those notes. Solfege is really a great way to train your ears to know exactly what you’re hearing!

Below is a chart showing the solfege syllables for each musical note in the C major scale:

Uses Of the C Major Scale 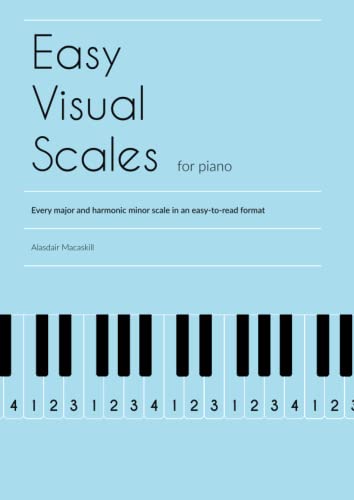