D Major Scale: How to play and harmonize this popular scale (with images)

by The Piano Mayor | Scales, Uncategorized 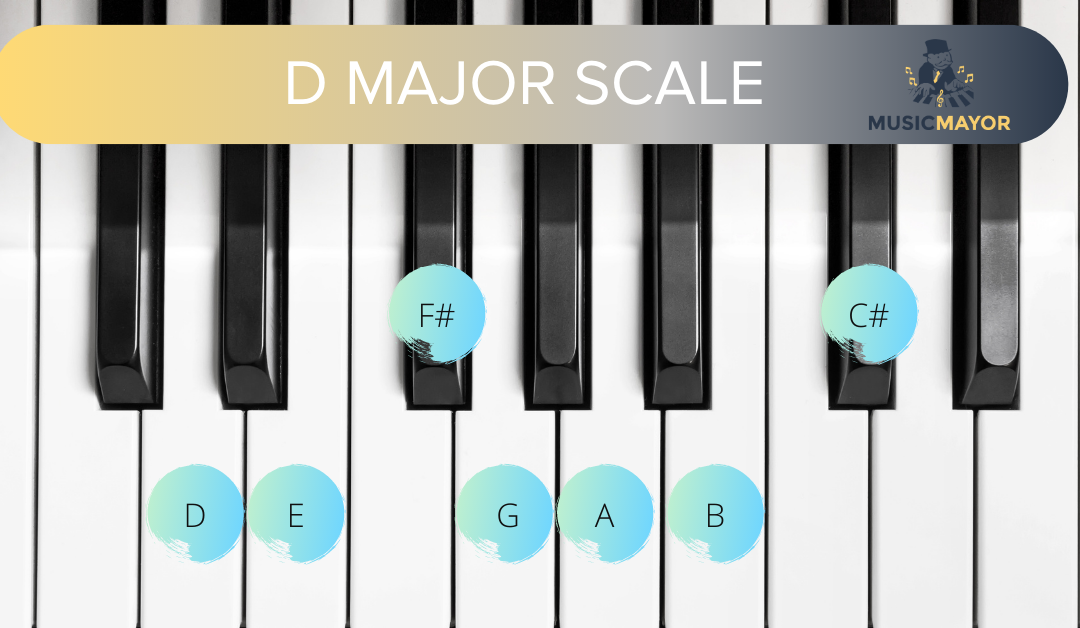 The D major scale is one of the most used scales among those who are starting out on instruments such as the guitar or piano. It is commonly found in a wide variety of genres and popular songs and can be considered as a good start for those who wish to expand their musical bases and want to start composing or covering.

This article is part of a larger series of music scales. Learn more about the C Major here.

What is the D Major Scale?

The D major scale is nothing more than a scale of musical notes that are structured in intervals of one tone between each degree, with the exception of degrees III – IV and VII – I, where the distance is half a tone, and whose main note (commonly called tonic) is Re. That is, the D scale degree is built starting from the note D and continues leaving one tone between each note, except between the third and the fourth and between the seventh and the first note.

In this way, we can say that the notes that make up the D major scale are:

Thus, it is the tonic D which, being the first note of the scale, gives the scale its name.

To facilitate the understanding of the D major scale it is very useful to visualize it on instruments such as the guitar or the piano. Such instruments are common for musicians just beginning their music theory studies and, due to the nature of the scales and their performance on these instruments, can be a very didactic way to learn them.

As you can see in the image above, the only black keys of the piano that belong to the D major scale are the keys corresponding to the notes F sharp and C sharp. The rest of the notes on the piano are distributed on the white keys, which are easier to see. In turn, a series of D major scale patterns (as well as the rest of the scales) can be found along the neck of the guitar. In the following illustration you can see one of these patterns:

The D major scale, like all scales, can then be drawn on instruments as a technique for learning and studying it. The notes of the scale are highlighted in order to understand the distances between them, as well as the function that each may represent in the scale. On the other hand, the guitar can be a very versatile instrument for playing the D major scale. In some cases, the sixth string of the guitar has usually lowered a tone, going from E to D, in order to have two strings available with the main note. Remember that the natural tuning of the guitar is E, A, D, G, B, E.

The D major scale and other instruments

The D major scale can also be a good choice for stringed instruments such as violin, double bass, and mandolin, due to the key in which they are usually tuned. The strings of these instruments are tuned in G, D, A,   and E, allowing an easy interpretation of the scale because it does not require much physical dexterity to achieve the sounds. In other words, such instruments naturally possess four sounds of the scale in the tuning of their strings.

In this way, you have a group of chords based on the D major scale. Then, if a song uses as a chord progression a series of chords from the ones shown in the table, we can say that this song is in the key of D major (name corresponding to the tonic chord). However, it is important to note that when harmonizing other scales, some of the chords in the table may be found. So, playing two or even three chords of the harmonized D scale does not always guarantee by itself that the song being played is in the key of D major.

Harmonizing the D major scale creates a world for composing, arranging, performing and improvising on any song that can be in the key of D major. That world will be composed of all those possible chord combinations that can be made with the chords obtained from the harmonization of the D major scale. At the same time, the original scale is not left behind, because based on it, infinite possibilities of melodic lines can be built, adding (or not) notes that do not belong to the scale (see chromatic scale and chromaticism), enriching the piece with variety and expressiveness.

Any musician who wishes to expand their knowledge of music theory, and increase their aural and playing skills on the instrument they are learning, should make use of D major scale harmonization and build chord progressions with it. The following examples of chord progressions in the key of D major may serve as a reference.

These chord progressions are basic and can be played one after the other. In addition, as practice for improvisation, you can play along with each progression some melodic line composed of notes from the D major scale. This will help to improve the ability to complement harmony and melody as a single figure that, in agreement, creates music.

Musical notation is also a tool that helps to understand what is going on in the scale by illustrating its structure. Practicing the D major scale based on reading musical notation allows you to develop greater fluency in music reading and serves as an outline for the study of later songs written in D major. Thus, with greater reading skills, it will be easier to interpret a piece and, with it, to introduce arrangements and improvisation in order to adapt it to the moment, to the instrument and to the musician. In the following image, you can see how to write the D major scale, both in G and F clef.

So, suppose we decide to read a piece written in a musical notebook where each line begins with a treble clef. The first thing we should do before proceeding to play the piece is to identify the tone of the song. To know if this piece is written in the key of D major, we will have to verify that the only two accidentals, generally indicated in the key signature of the piece, are C sharp (C#) and F sharp (F#).

In this way, when we find a piece written in D major we only have to identify the position of all those notes of the D major scale in our instrument. This will save us the task of having to identify the correct position for each note expressed on the musical staff, increasing our performance and skill in the interpretation of the piece.

Musical notation of the harmonized scale

At the same time, the musical notation of the harmonized D major scale can also be displayed. It is not very common to find the chords written down in a pentagram notebook, but it can help to understand the structure of the chords since it helps to visualize the intervals between each note. It would be a purely theoretical practice, because when playing a chord progression of the D major scale, the most convenient is to use the usual chord notation, such as D, Em, G, F#m, etc.

To better understand how the intervals are structured in the D major scale, see how the distances between each note are placed:

Then, a minimal modification in some of the intervallic distances of the second row would modify the notes and, with them, the scale as a whole.

The relative scale of D major

An interesting aspect of knowing the relative scale of D major is the duality between the two. That is to say, we could find a song written in the key of B minor and by knowing the major scale of D we would already have a basis for improvising, arranging or composing on that song.

How do you know if a song is in D major or B minor?

It may seem confusing since both the D major scale and the B minor scale have the same notes and the same chords. It is a complex task to identify that difference in a song, but it could be inferred based on the notes or chords on which the song rests.

If we come across a song that has chords in the harmonized scale of D, we can assume that the song is in the key of D major if at the beginning or end of its verses, choruses, or sections, the song ends with the chord of D major (D). However, it is not a sufficient guarantee to affirm this. Only the complete study of a piece based on the D major scale and its relative can determine if the piece is, in fact, written in the structure of the D major scale.

The D major scale is a very easy musical structure to play, compared to other scales. Its harmonization can be used to build simple to large chord progressions and can be the basis for writing melodies based on this scale. Every musician who wishes to improve their theoretical and practical skills should make use of scales, and the D major scale is a good choice when it comes to improving instrument playing, improvisation and sharpening the musical ear. 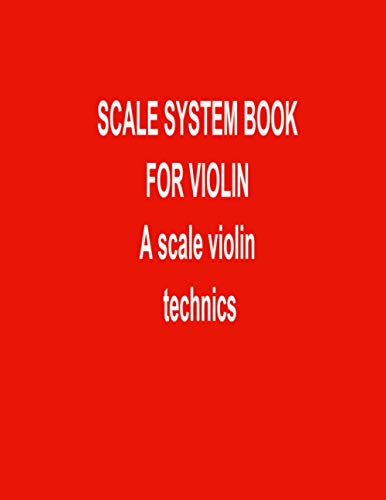 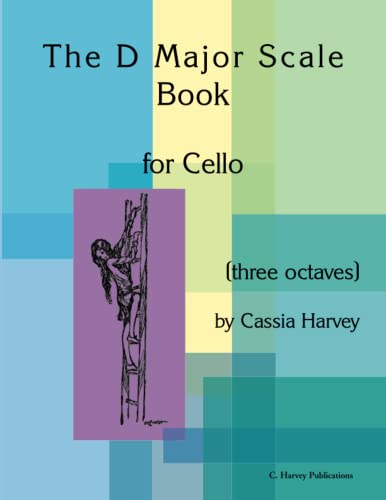 The D Major Scale Book for Cello (Three Octaves)
$9.95
in stock
5 new from $9.95
BUY NOW
Amazon.com
Master Pentatonic Scales For Guitar in 14 Days: Bust out of the Box! Learn to Play Major and... 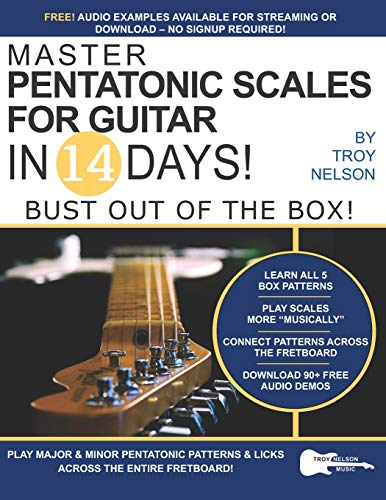 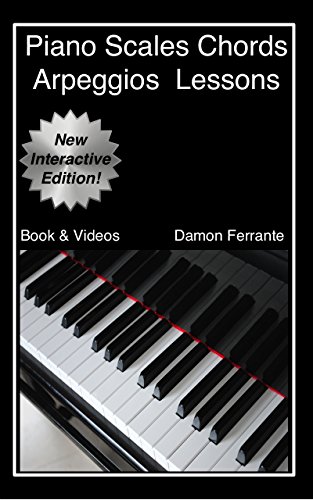